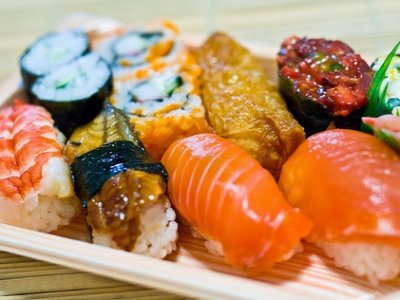 I’m still considerably new to sushi. Because of a shellfish allergy, I gave up eating regular fish for nearly a decade. A couple years ago (thanks to the boyfriend) I slowly started coming out of my anxiety shell – and being more experimental with food. Now, I am totally addicted to it.

In Japanese cuisine, sushi, defined, is rice – typically with raw fish – wrapped in seaweed. The use of vinegar and sugar in the sticky grain help to mold the rolls that most of us are accustomed to seeing or eating. That said, sushi does not have to be rolled or include just raw fish.

There was this one time that I was swimming in the ocean, and I was strangled in a mess of seaweed. The thought of eating it gave me recurring nightmares. But seaweed – or nori – is dried out, made into a paper-like substance and wrapped either on the outside or inside of a sushi roll – and honestly, is tasteless.

The common ingredient in sushi is rice, regardless of its traditional or contemporary varieties. Sushi rice is very specific because of its short grain and sticky texture (when wet for molding). Botan is a good type that is high in gluten, but has to be added to the vinegar and sugar mixture to be sushi appropriate.

Start with scallop, halibut or tuna, which are considerably milder and less “fishy” than others kinds– these are also the most popular types of fish found in sushi restaurants. Also, while the texture is not quite beginner friendly, squid is also a very mild ingredient worth trying.

If you are not a bold beginner, a slice of seafood (without rice) might be off-putting. Sashimi is just that – a piece of saltwater fish, cut into a size that is easily picked up with chopsticks and typically served with a dipping sauce, such as soy or wasabi. If you are willing to try, you will taste some of the freshest fish of your life.

Sushi actually refers more to the rice, than to the fish itself – and can even be vegetarian (cucumber and asparagus being popular non-meat ingredients). Fish can also be served Aburi style, which means that it is partially grilled. Eel is always served cooked and mackerel is oftentimes pickled – both good for beginners who might not opt for uncooked fish.

Whether your sushi is hand formed or created in a bamboo roll-mat, there are different styles. The most popular are maki, temaki and nigiri. Maki is likely what you think of when you hear “sushi” – a cut roll, wrapped in seaweed; temaki is a hand roll also rolled in seawood, but shaped in a cone; nigiri is nicknamed “regular sushi” as it is a piece of raw fish on top of a mound of rice. There are also western-style variations (found mostly in the U.S.) that include the California roll, Spider roll and the Philadelphia roll.

Many Asian cultures use the ubiquitous soy sauce for additional flavor. And with sushi, most of the sauces are soy sauce-based. Not only served as an accompaniment for dipping, some sauces are found inside the rolls, such as: spicy mayo, Sriracha-based or a sweet & spicy. Wasabi is also used to add heat to sushi – and its sauces.

On your plate, you will almost always see pickled ginger, which is intended to cleanse your palate between sushi. Oftentimes, toasted nori (seaweed) or shredded daikon radish is added to the garnish selection – which are both edible. But do not ignore the presence of the green, pasty Wasabi, which is a Japanese Horseradish. Use in the smallest of SMALL doses until you are used to the heat.

Because of its Asian heritage, sushi can get downright weird, but that is obviously because of the types of food customary in our culture (hello, hamburgers!). In Japan, being surrounded by the water, the people seem to be much more adventurous in their eating habits – especially when from the sea. Sushi can be topped with fish eggs. Or be stuffed with eel or squid – and while my boyfriend promises that the latter is delicious and great for a beginner, I can’t promote the strange texture. With each subsequent visit to a sushi place, be more adventurous with your order.

And if I had a #11, I’d tell you that YOU WILL CRAVE SUSHI after first trying it. What is something you recently learned about sushi – or would tell a beginner?